VIDEO: Honey, I shrunk the PAM! The Panerai Quaranta collection

From the 47mm Destros and Bronzos to the monstrous 60mm Egiziano, Panerai has never shied away from large diameters, nor should they, for that matter. The first watches Panerai made were modified pocket watches – the 1936 ref. 2533 measured in at 47mm. Today, however, is about the more wearable spectrum of Panerai’s catalogue. The 40mm Panerai Luminor Quaranta combines the surface-dwelling Luminor Due’s compact dimensions with water resistance more fitting of a PAM. Andrew and I had a chat about all things Quaranta, which you can see in the video below.

The Panerai Luminor Quaranta is a true PAM, but smaller!

Clearly the most important thing here is the combination of approachable size, without departing from that classic Panerai look. At 40mm x 48.9mm, the Luminor Quaranta wears phenomenally well. The cushion-shaped case sits atop lugs that curve sharply downwards, so even those with wrists smaller than mine should be able to enjoy it. 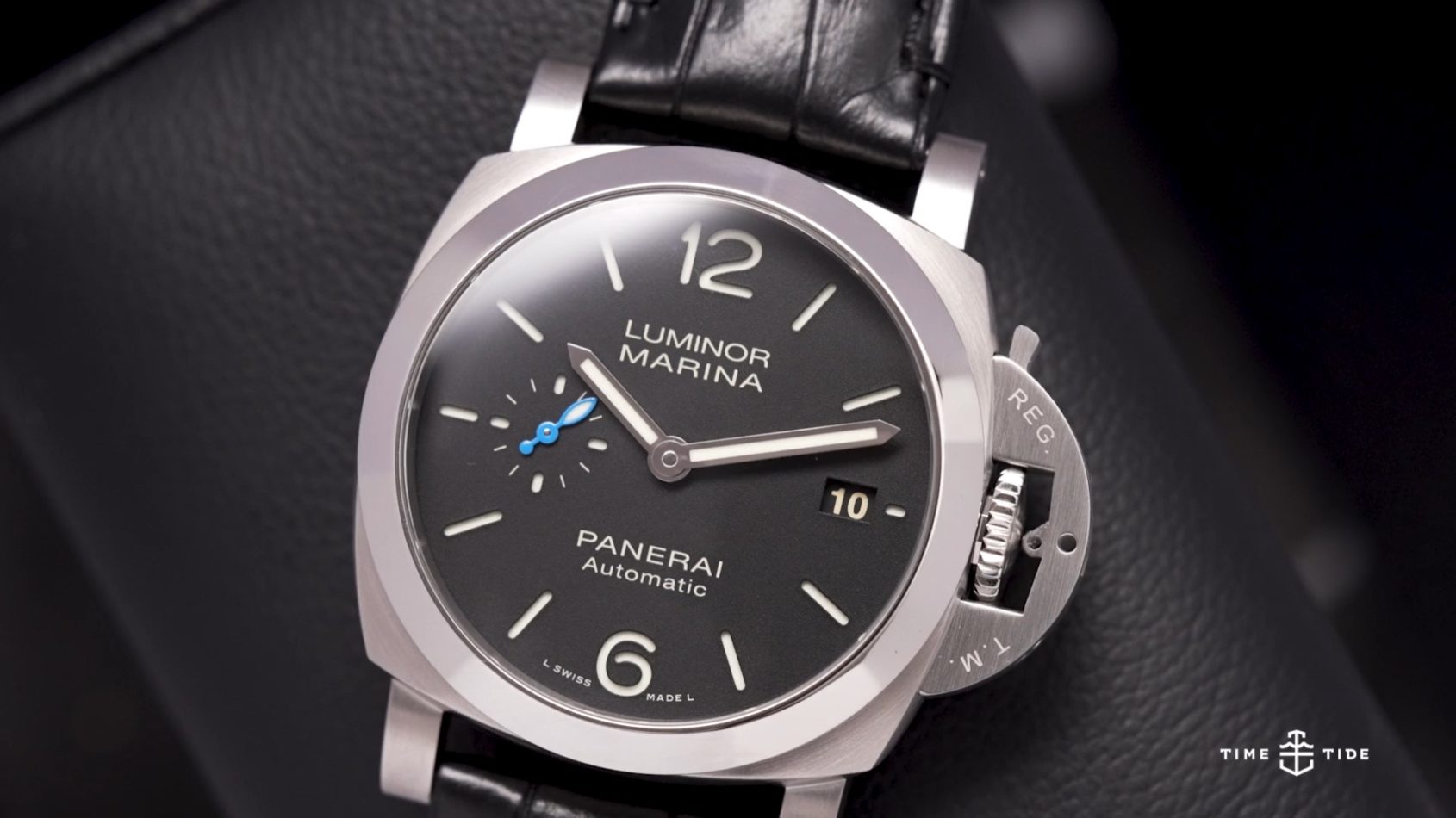 All the other recognisable features are there. The REG. T.M. text that appeared with the first Richemont-era Luminors still features on the signature crown guard, locking the crown into place when not in use. I appreciate that Panerai chose the matte finish of strong directional brushing, a superior choice when compared to the highly-polished surfaces of the other 40mm Panerai, the PAM01048. The Luminor Quaranta has a 22mm lug width, with all models mounted on quick-release alligator straps that taper to 20mm at the stainless-steel pin buckle. 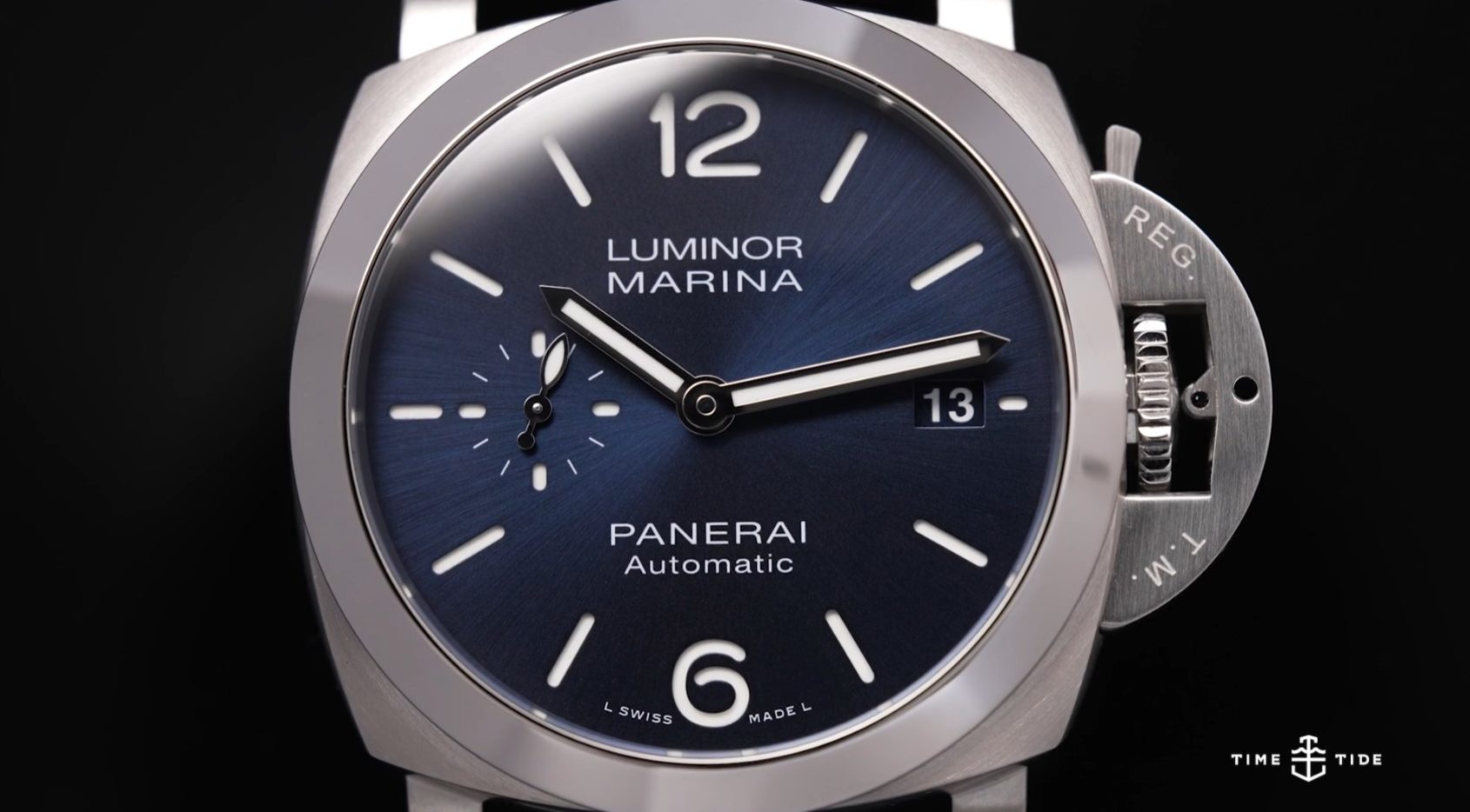 Panerai offers a choice of three dial colours, each differing slightly from the other. The blue brings a metallic sunburst finish, highlighted with stark white lume of the hands and sandwich-dialled numerals. The effect is subtle in low-light conditions, turning into a dark, ocean-abyss like hue. 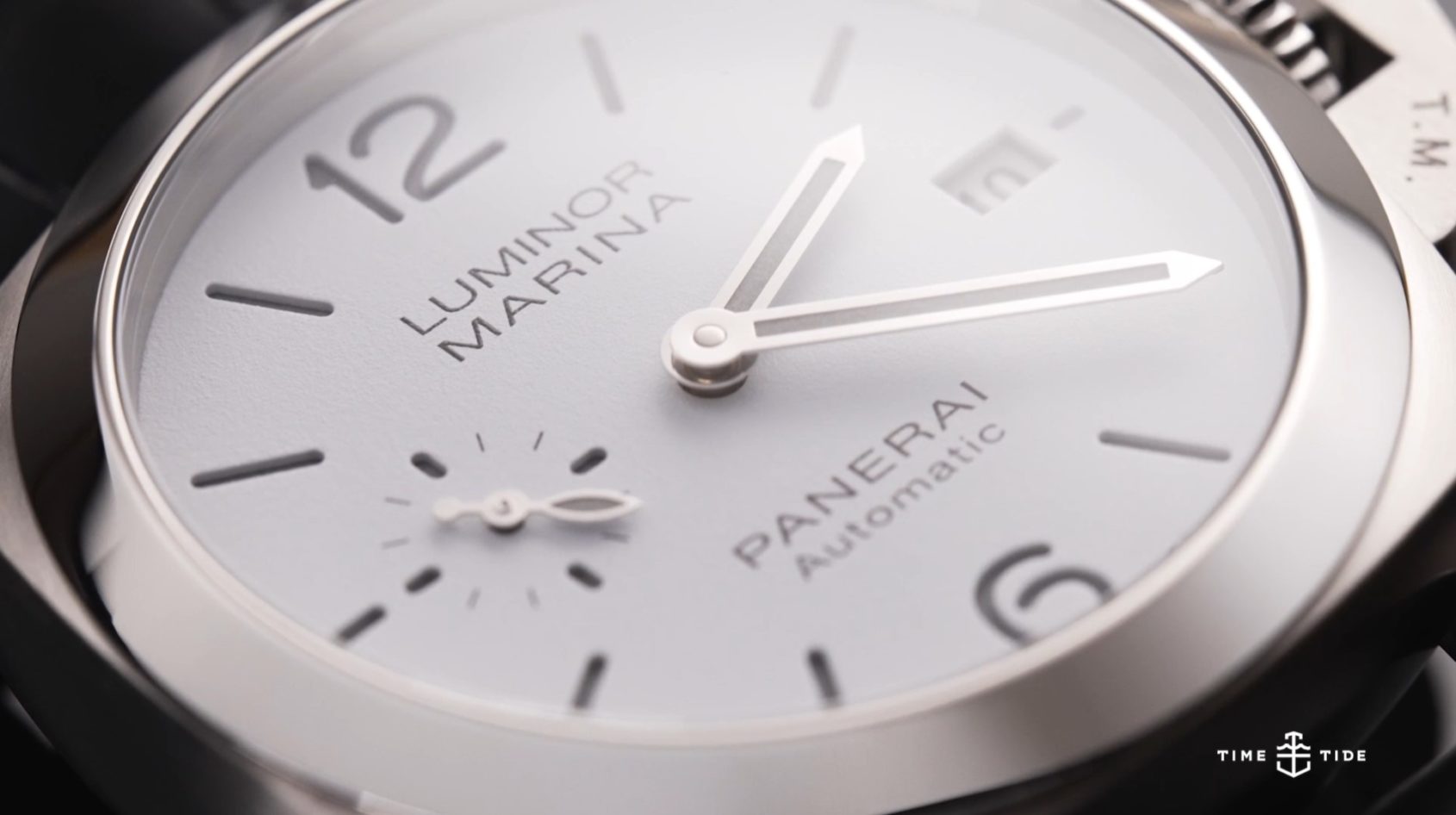 Doubling down on that well-known Panerai look are the white and black dials, each with a grainy texture to boot. The white is the most minimal of all, using off-white lume that gives the dial amazing depth when observed off-angle. The black is the most traditional, with a flash of blue for the 9 o’clock small seconds hand, and is hands-down my favourite of the lot. The Panerai P.900 is responsible for timekeeping in the Luminor Quaranta, delivering a steady 72-hour power reserve, though the closed casebacks do not offer much insight into the degree of finishing applied to the P.900 in the Quaranta. Renamed from the OP XXXIV ValFleurier ebauche-based movement, Panerai insist the P.900 is an in-house movement. 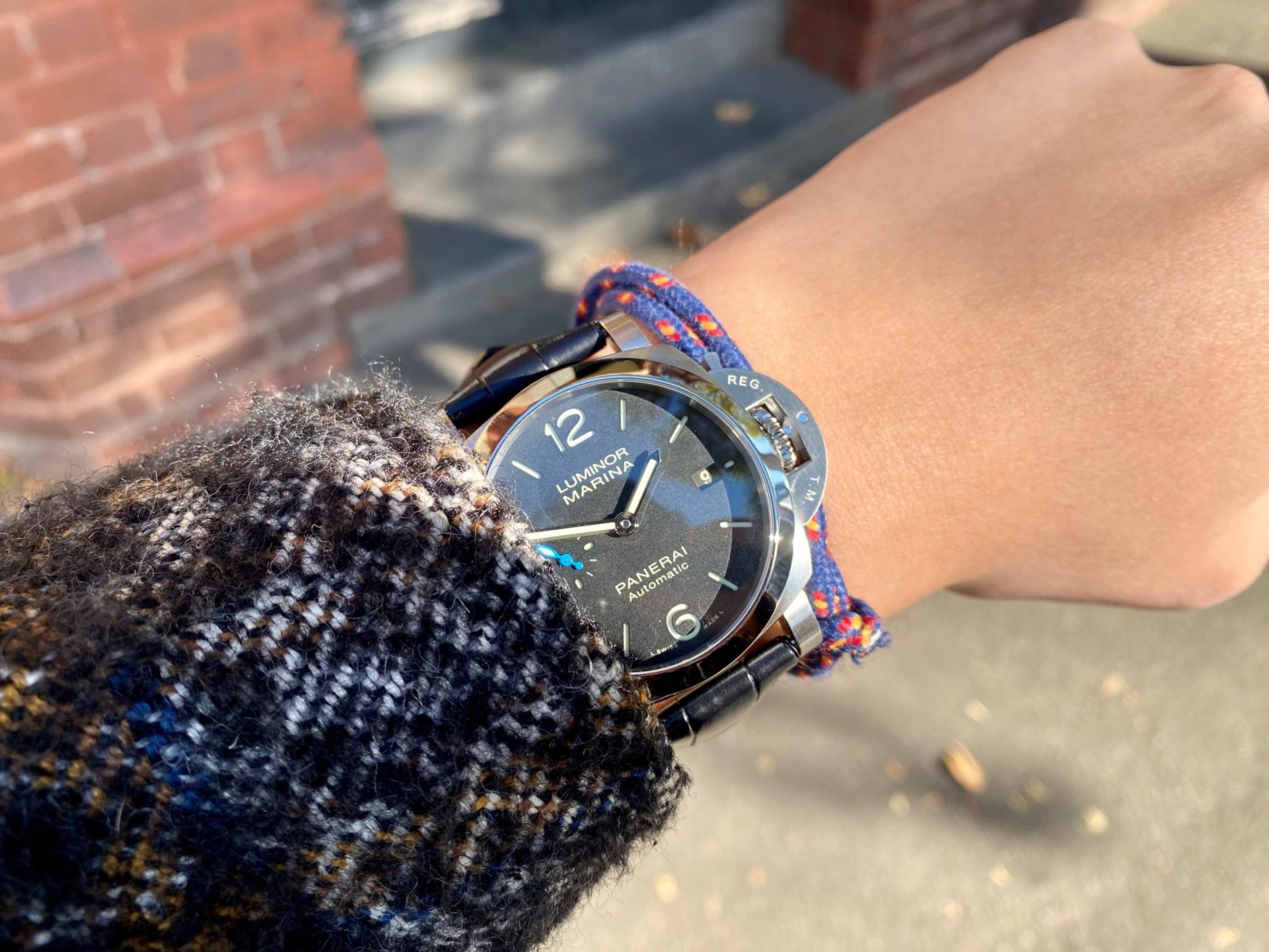 The Panerai Luminor design is one of the few in the watch industry deserving of the iconic moniker. Now accessible in a smaller size, with specifications that match the style, this may be the watch that draws in the small-wristed crowd. I thoroughly enjoyed my time with the it, and found it difficult to send back when the time came. The Panerai Luminor Quaranta is a true PAM and a great one at that, though at $10,800 AUD and with the P.900 movement, it’s certainly not a value proposition. 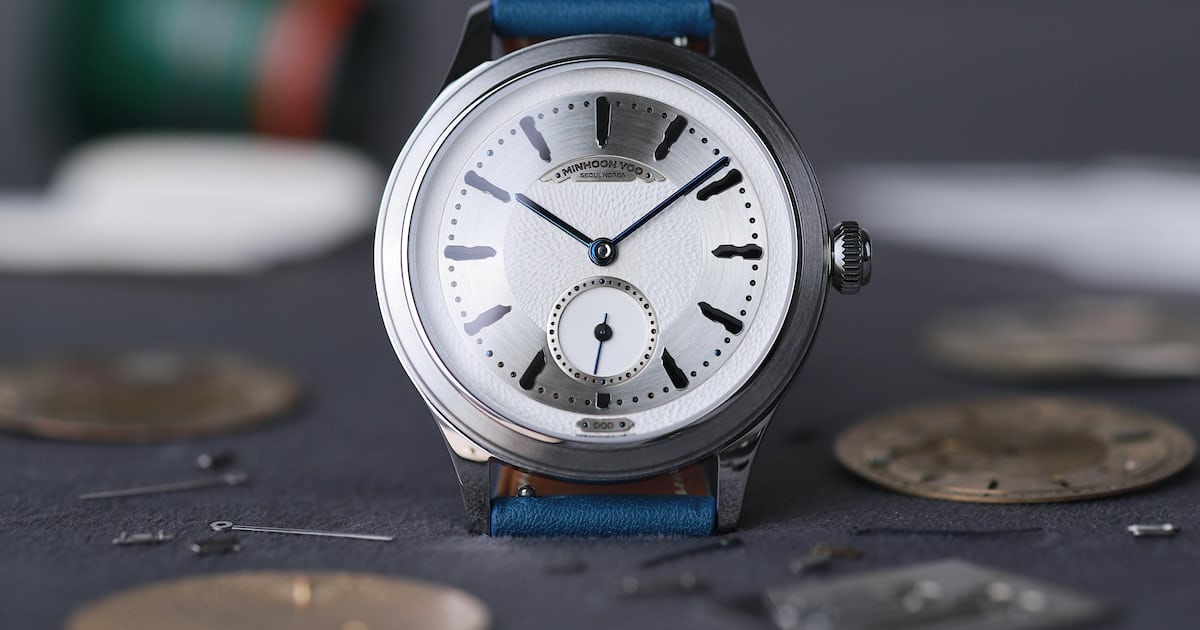 One To Watch: Korea's Rising Star 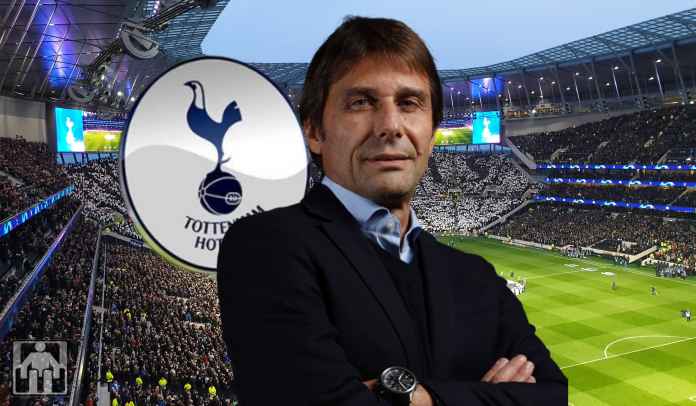