Spurs have been handed a major boost in their effort to retain the managerial services of no-nonsense Italian boss Antonio Conte.

A recent report from leading transfer expert and CaughtOffside columnist Fabrizio Romano suggested that Conte is keen to continue leading the Lilywhites, despite earlier suggestion he may walk away this summer.

Tottenham sources are still confident that Antonio Conte will continue as manager, they want him to stay. Talks on targets, outgoings and contracts including Harry Kane ?? #THFC

Ivan Perisi?, in the list as potential target waiting for his decision.
More: https://t.co/kgpbzZICWx pic.twitter.com/FCkQcOBNXT

Conte, 52, is known for his winning mentality and after successful stints at both Chelsea and Inter Milan, which saw him lift three major trophies combined, it is clear that the Italian only has eyes for silverware.

MORE: John Terry hits back at Rio Ferdinand on Twitter after fallout over rankings

However, despite winning the Serie A with the Nerazzurri last season, Conte walked away at the end of the season, presumably due to the club’s summer transfer policies not matching his own vision.

Now at Spurs and working alongside compatriot and managing director Fabio Paratici, Conte, who recently guided the Lilywhites to an unlikely top-four finish, could be plotting a major summer rebuild.

It is expected that if Conte were to commit his long-term future to the Londoners, then star striker Harry Kane will follow suit.

One person who feels a lot could hinge on the 52-year-old’s decision is super-agent Roberto De Fanti.

Speaking recently in an exclusive interview with CaughtOffside, the Italian agent said: “He [Conte] wants a striker to provide cover and competition for Harry Kane and Son Heung-min, a top midfielder and a left-footed centre-back – these are not going to be cheap players. We are talking £50m – £60m each.

“Will Levy sanction that? – Time will tell, but one thing I will say is, if Conte does walk away from Tottenham Hotspur, I think Kane will go too and if that does happen, the only club the Englishman would want to go to now is Manchester United.”

Irrespective of what may, or may not, happen with Kane this summer, fans will undoubtedly be feeling a sense of relief that things seem to be moving in the right direction when it comes to Conte.

VIDEO: Honey, I shrunk the PAM! The Panerai Quaranta collection 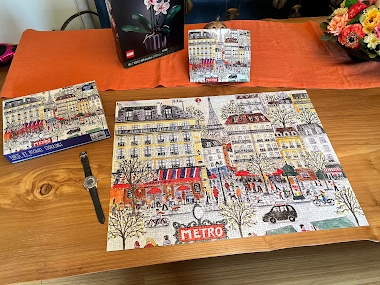 Horological Meandering - Paris! My wife has become very good at jigsaw puzzles during the pandemic!