Typically categorized as in the title of this article, these sorts of instrumental sounds are often tied to a specific culture(s) or time period. The sounds are often distinct with timbres that stand out from traditional Western instrumentation, while some can be heard as the forerunners of modern instruments. Their use can immediately set a piece of music in a particular time and space that can help drive a visual narrative or evoke imagery consistent with a geographic location. But they can also be used in more freely creative contexts to take advantage of the unusual sonorities and timbres.

Below are some excellent collections I’ve come across (presented in no particular order) at various price points with a wide range of features.

The cimbalom is a struck string instrument that can sound like a sort of hybrid harpsichord/piano. Precisionsound offers several instruments with this collection that include long and short gestures, harmonics and special effects. It also comes with instruments for the EXS24 (which will open in Logic’s newer Sampler instrument), Kontakt and HALion. While it uses the default interface in Kontakt, users easily get a decent sound by instantiating the appropriate instrument.

This one is a beautiful collection of instrument sounds from India along with a ton of preset patterns that can be edited and dragged into a session as MIDI. Sounds include the tabla, pakhawaj, mridangam, ghatam, kanjira and more. It is really well done with control for root key, feel and intensity. Ensemble and individual instruments are included. 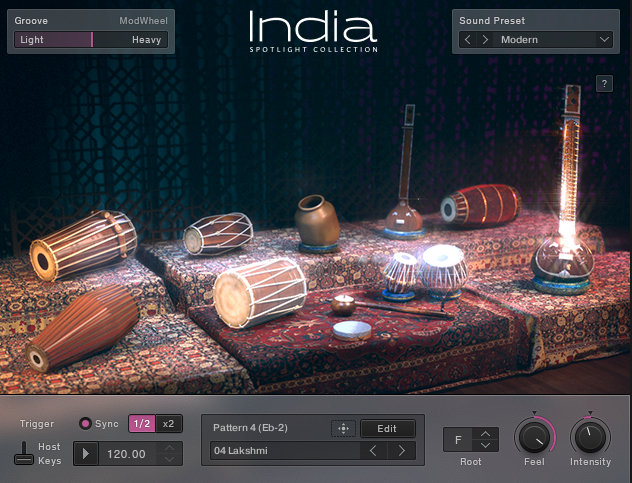 Also from NI (and Soniccouture) is this great collection of gamelan that gives the user control over timing and tuning to accommodate the distinct sonic character of these percussive ensembles. The envelope section allows for a velocity-sensitive attack and decay, and the inclusion of filter and LFO sections is a definite plus. 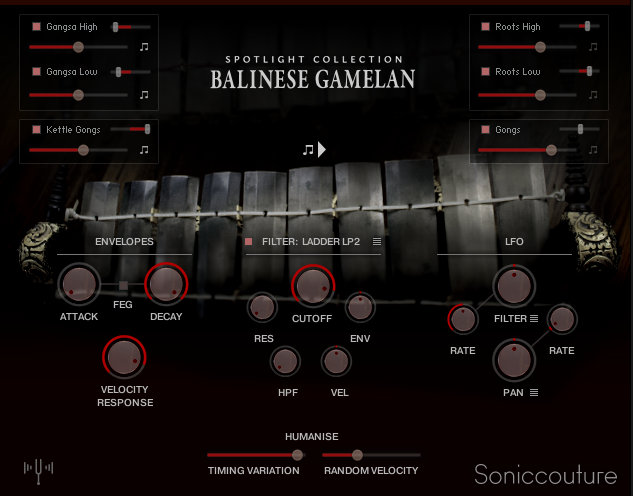 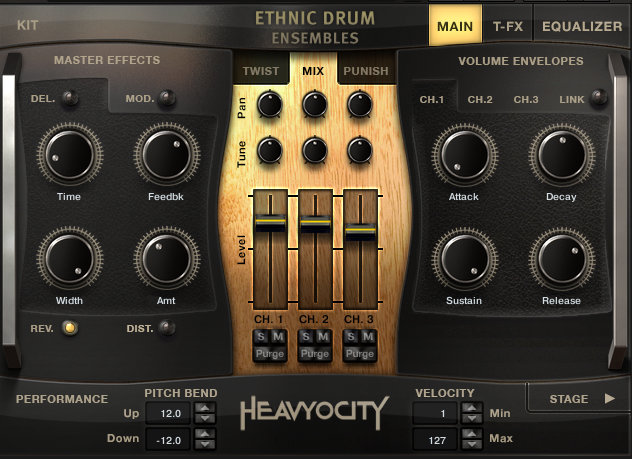 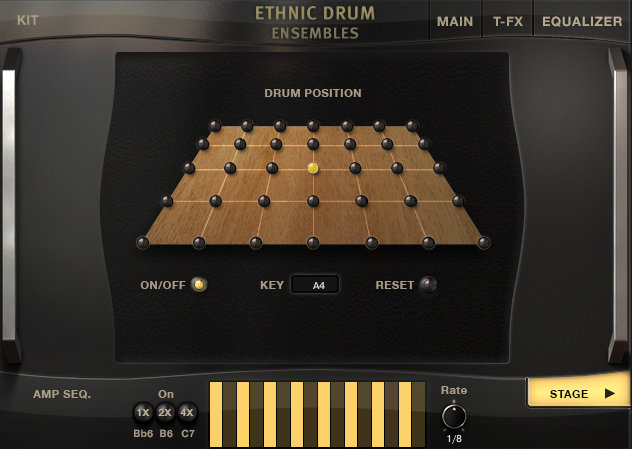 This loop library by Black Octopus is definitely worth mentioning here. It is comprised of Indian grooves and instruments including the tabla, dholak, salangai bells, udakkai, kanjira and many more. While a loop library won’t provide the same control as a typical Kontakt instrument, this collection has a wide variety of choices in a variety of tempi and ensemble configurations that are ready to be dropped into a session or sampler. And the price — at just over $20 as I write this — makes it hard to resist. You might find just what you were looking for to spice up a production. 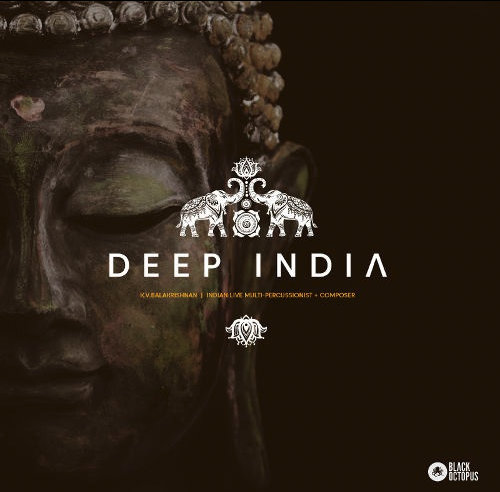 This bundle includes three instruments — Ethno Cinematic, Ethno Groove and Ethno Scapes — and each comes with a clean-looking interface that gets right to the point. These are ethnic sounds with extraordinary processing effects that can create very unusual timbres and textures only possible due to the unique underlying instrumental samples. They also include a variety of loops and patterns. These three collections will provide everything from strange ambience, to exotic grooves, to cinematic hits and playable leads. 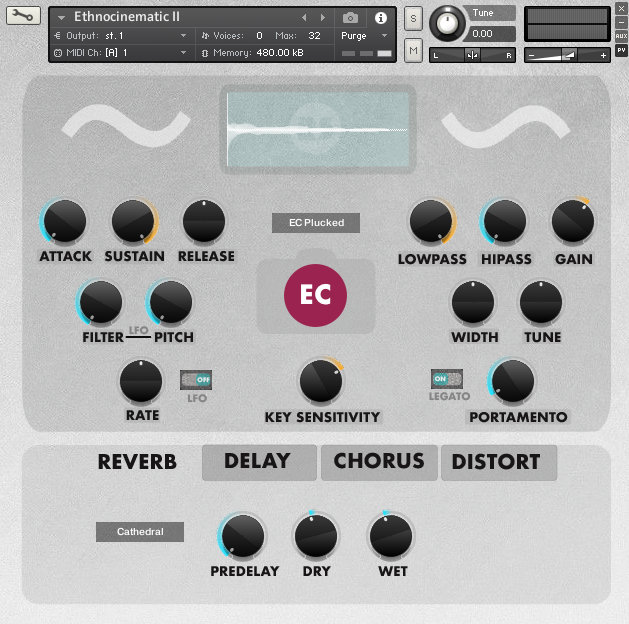 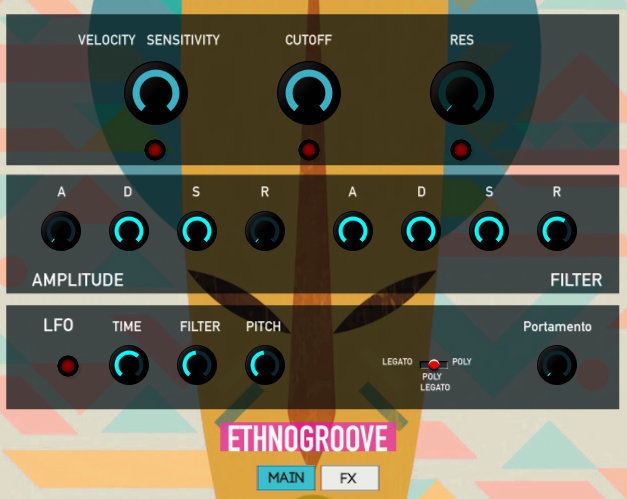 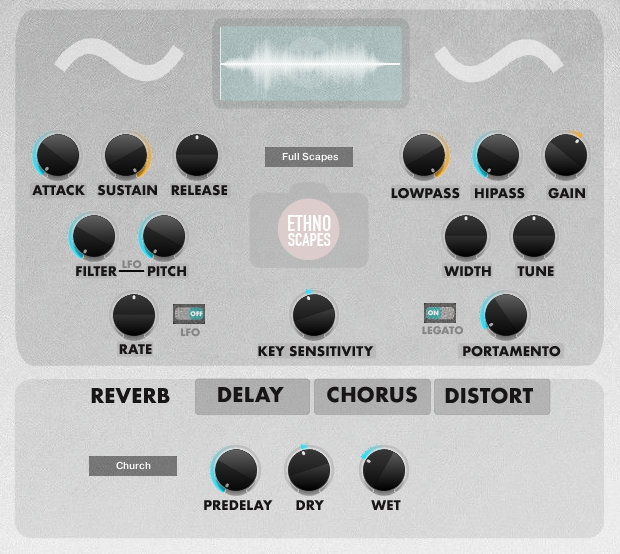 This collection offers a wide variety of world instrumental sounds such as the steel tongue drum, balalaika, oud and qanun. The interfaces are simple with just EQ and reverb, but you will get an authentic sound fast with these well-recorded, velocity-sensitive samples. The oud and qanun sound particularly good and the arpeggiator sections allow for delicious complexity while retaining a sense of humanity. Sonuscore explains: “The Multi-Arpeggio-Designer…[includes]… two fully customizable arpeggiators…[that can]…create interlocking patterns and broad soundscapes by combining the unique timbres of the two instruments. The engine is designed to convey a musically meaningful, human performance, instead of a computer randomly aligning notes.” You can also export and import patterns you create in the session, a valuable feature often lacking in other instruments. 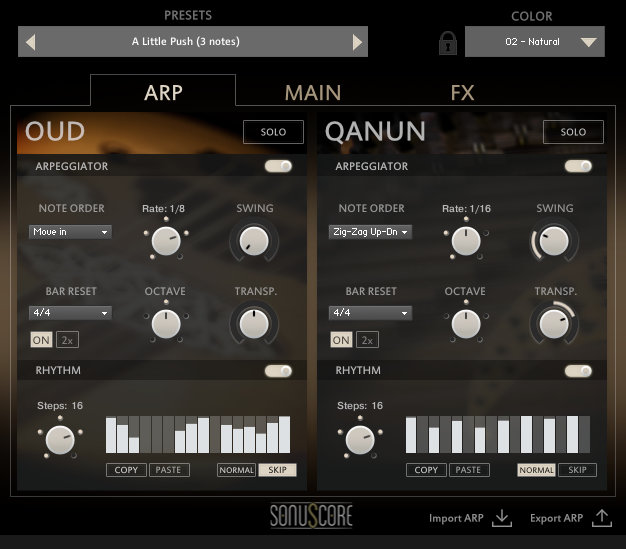 Also worth noting from Sonuscore are the Ancient Duduk Phrases and Ethnic Flute Phrases collections. These are beautifully recorded lines that can be perfect for the right context. 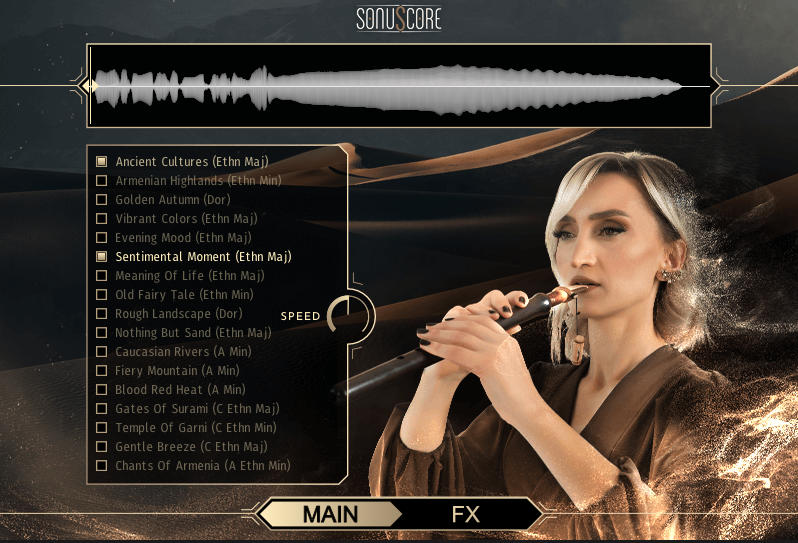 In addition to being accessible via Kontakt, Sonuscore also offers versions for the free HALion Sonic SE by Steinberg.

This amazing collection of over 369 instruments and 10,000 playable loops is stunning and will take you hours just to hear what’s possible. The single-page interfaces are very clean and easy to navigate with control tailored for the instrument. There’s equalization, spatialization, envelope controls and key switches for articulations. You can customize the expression control typically linked to things like tremolo and vibrato. The processing controls seem incredibly responsive, allowing you to quickly tweak the timbre and amplitude response of the instruments. You can load instruments via Falcon, their flagship multipart virtual synth, or via the UVI Workstation. The sounds are logically organized in five main categories: by region, type or instrument, loops & phrases, travelers and vocals. The nested menus make finding the sound you’re after super fast. Several interfaces include a dice icon for randomly choosing instruments or patterns in an ensemble.

This is a beast of a collection on its own, but when you consider that these instruments can be combined with the robust synthesis and modulation capabilities of Falcon, the possibilities are infinite! 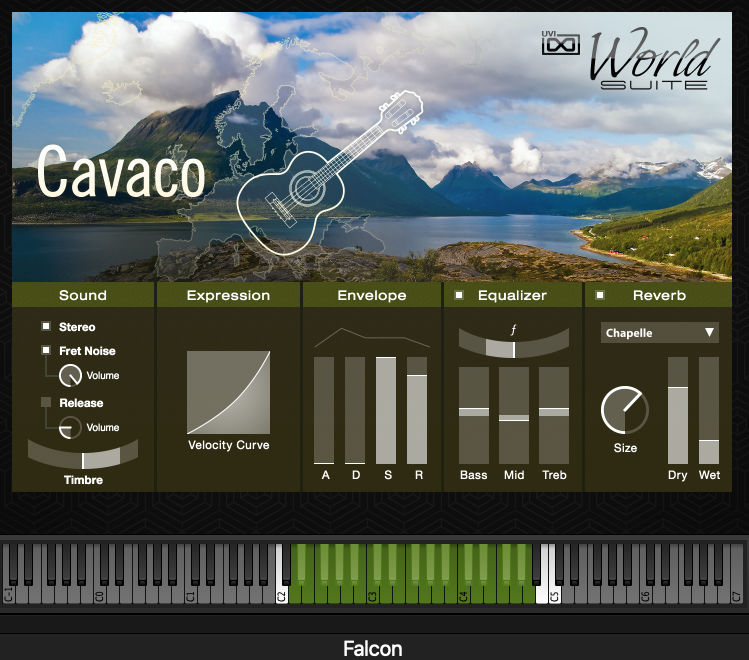 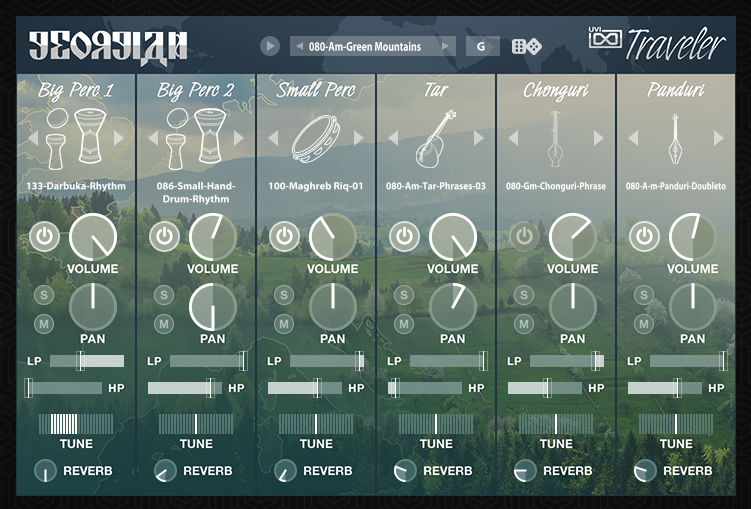 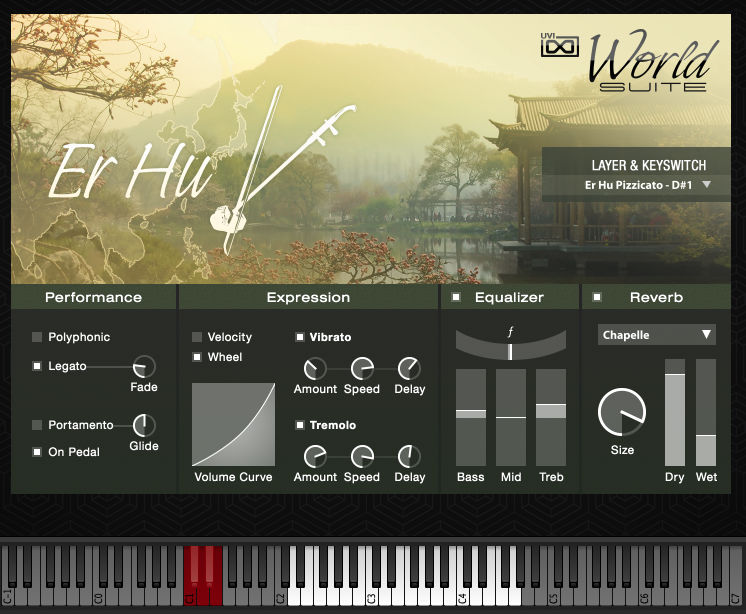 This is a superb library from 8Dio that features a batucada percussion ensemble. Batucada is a substyle of samba and refers to a percussive style, usually performed by an ensemble, known as a bateria. Batucada is characterized by its repetitive style and fast pace. As is samba, the Batucada is a Brazilian musical expression with African roots. (source) 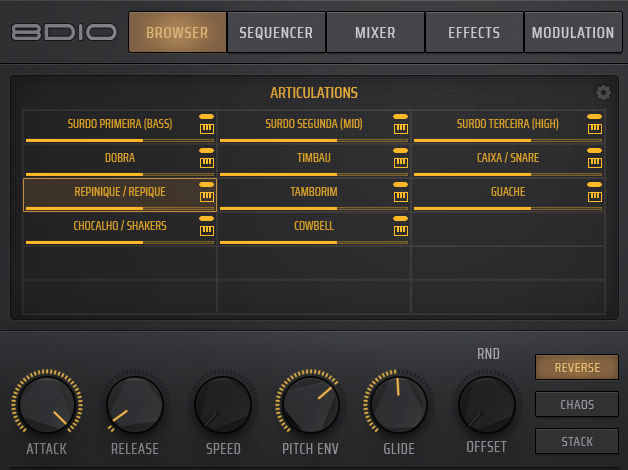 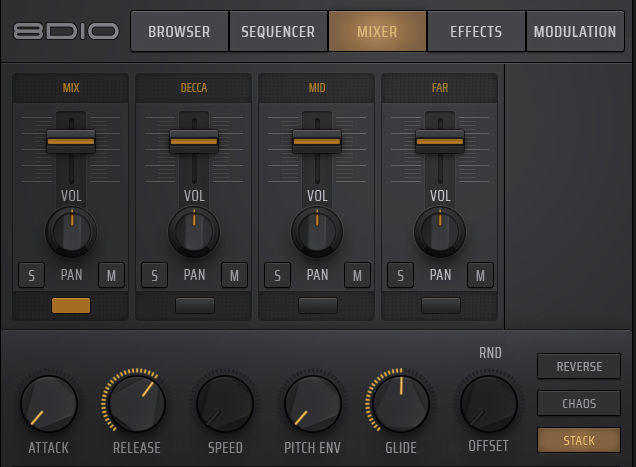 The collection features 11 different percussion instruments, claps, vocalizations and special effects. There are solo instruments and various mixed ensembles and playable performance loops. The interface is reminiscent of other 8Dio libraries. It features a mixer panel for various mic positions, four configurable XY pads for effects and a page for tuning, gate & expression controls. There’s a convenient chaos button for instant randomness and a reverse button if you’re in the mood for that tried and true gesture. An onboard sequencer with up to 32 steps is easily programmable to create your own grooves. 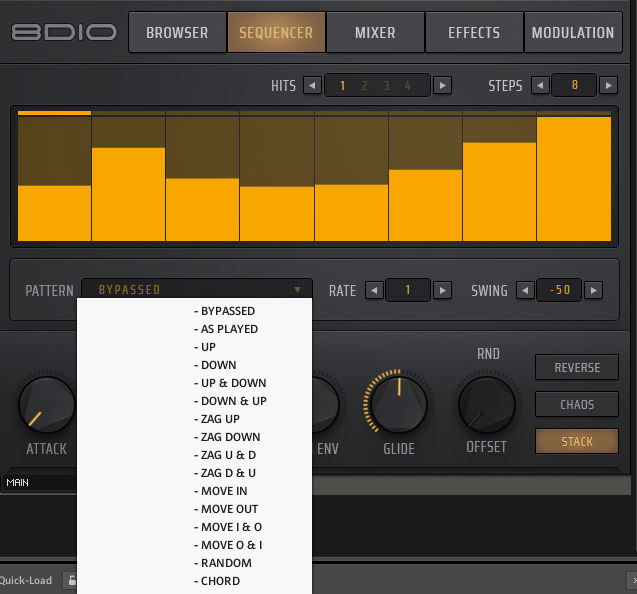 The developers at 8Dio explain, “The batucada is a Brazilian band composed exclusively of percussion instruments, traditionally accompanied by marching in a parade of costumed dancers and floats in the Brazilian Carnivals.” This collection of sounds is great for creating high-energy, raucous festival-style jams, intensely performed by the 33 member ensemble.

This is a collection of pristine samples accessible via beautifully designed interfaces and available in all standard plugin formats. Included are the dadi, dongxiao, zheng, qudi and pipa. When I first instantiated one of these gorgeous instruments I was immediately struck by the inviting and intuitive graphic design that features an image of the sampled instrument and a home screen that gives easy access to commonly used parameters and articulation key switches. Mouseover hints for all button icons speed the learning process for users. Every instrument sounds amazingly natural, and an added feature shows the fingering of the notes being played on the wind instruments and a vibration animation on the strings.

These are thoughtfully programmed devices that consider all the possible nuances of each particular instrument. There are several mic positions available for mixing as well as mid-side configurations. You can configure the tuning of individual notes using a dedicated tuning page — a feature that definitely adds to the authenticity of these instruments. The effects pages include compression, EQ, delay and spatialization. Each effect has a graphic interface that makes it fast and easy to dial in the sound you’re after.

The zheng instrument offers three playing modes and alternatives for traditional tuning, typical keyboard tuning and a third mode to help simulate the idiosyncratic gestures and tunings specific to the instrument. 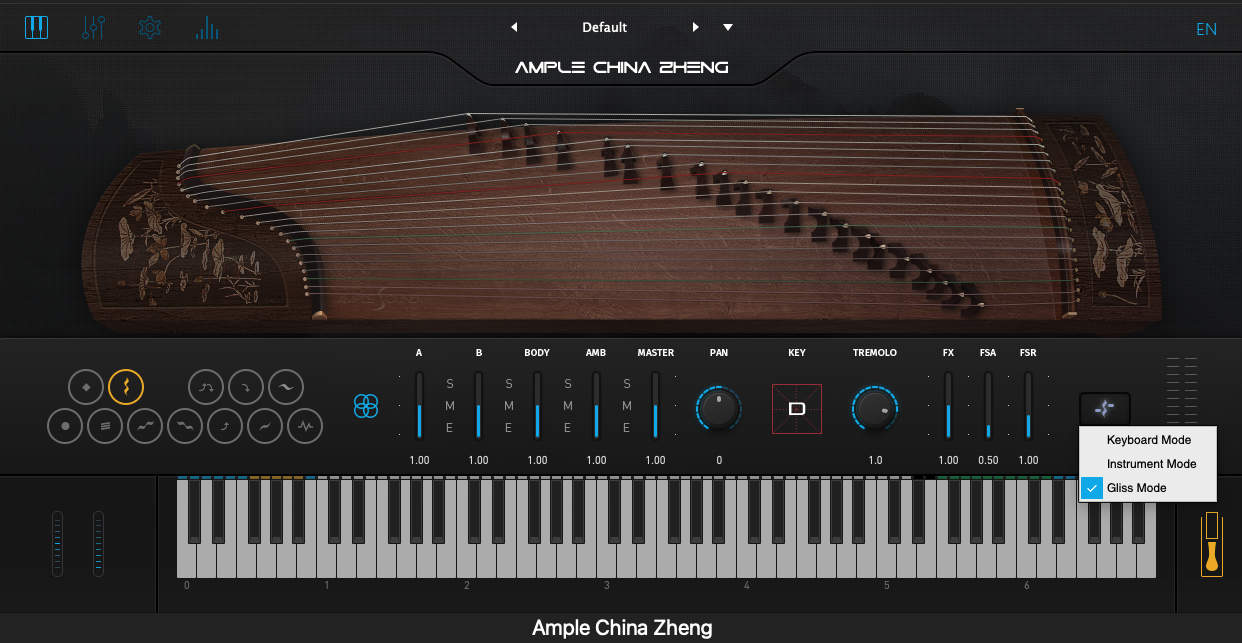 Wind instruments like the qudi offer velocity-sensitive articulation switching and even randomization possibilities. The “intelligent legato system” detects the duration of each note. For legatos whose durations are less than this value, only the straight legato will be triggered to ensure that no unwanted grace notes are generated during fast performance.” This in combination with velocity sensitivity allows for incredibly realistic performances.

Adjustable wind effects allow for control of the breathy elements in a performance, further improving the realism possible with these instruments.

The pipa has a chord screen and strumming options that add to the authenticity, and you can create your own chords with the simple fretboard interface.

I can go on and on about these fantastic instruments and can say that this being my first experience with Ample Sound, I am enticed to dig deeper into their extensive catalog.

Other Ethnic Libraries Worth Checking Out

Whether you are after an authentic sound from a specific culture, need to support a particular time period-based narrative, or simply want to explore new timbres and textures that can be used in your productions, the choices listed above will all deliver. And not to be overlooked is the idea of combining the new and the old, the West and the East and all things in-between.

Check out my other articles, reviews, interviews, and my video tutorial series, Synthesis 101 available exclusively on The Pro Audio Files. 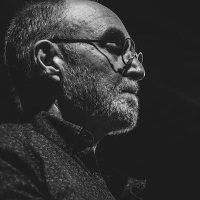 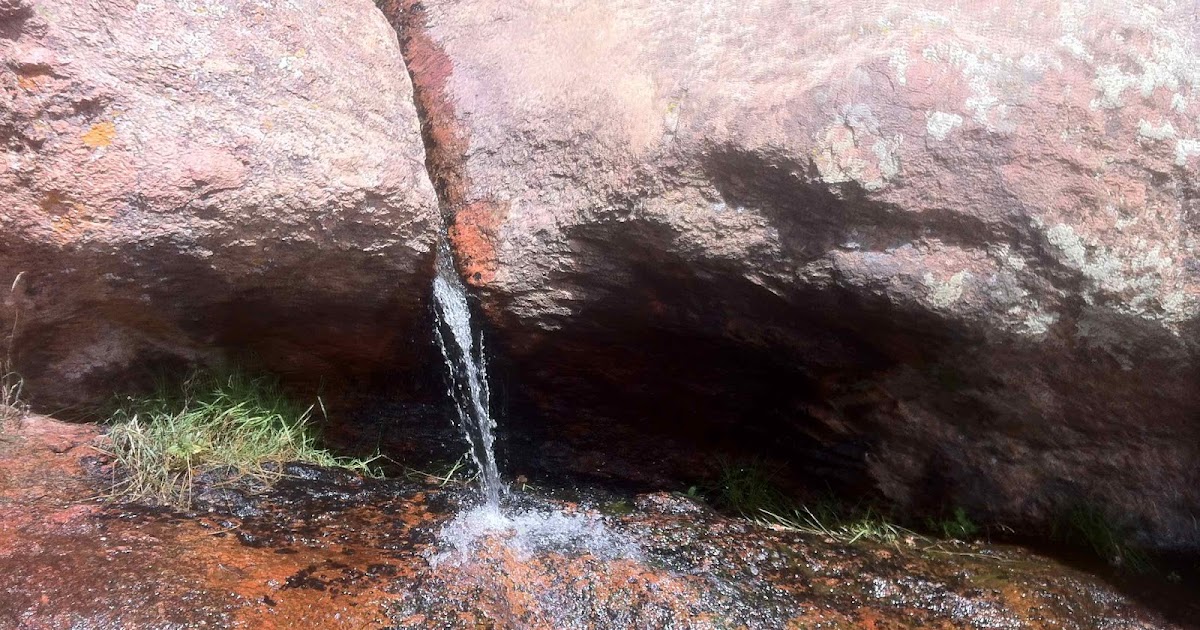